The ‘Concepts of Freedom’ exhibition is part of the Stellenbosch Triennale and consists of video installations and films by exciting young African artists.

The work in this exhibition and film festival responds to the shifting landscape of visual engagement. With our interrupted history in the frame, the artists make it apparent that the most effective approach to expanding the medium of visual art is… Whatever we want. BUT, it is important, however, to remain in dialogue with existing mediums; ones that have served different functions on the continent: what was and is already here. 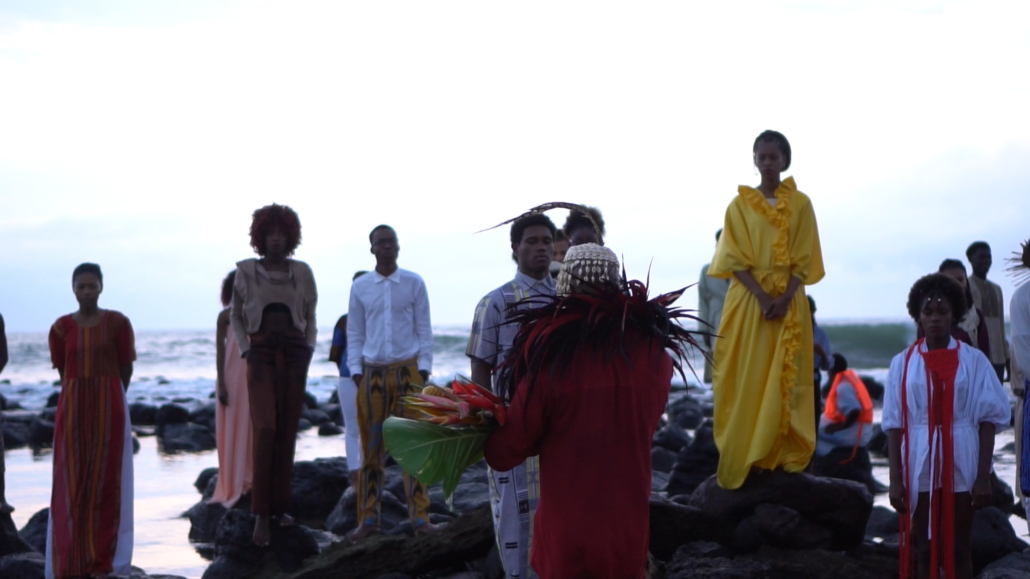 Concepts of Freedom launches with the exciting World Premiere of Sunny Dolat’s Film, In Their Finest Robes, The Children Shall Return on Thursday 19 March at 6pm. This film from the Kenyan fashion curator and creative director stages a fashion performance with high symbolic value: 56 fashion designs, one from every country of the African continent bearing witness to a healing ritual on the cold shores of São Tomé Island.

Dolat is joined by the Tanzanian visual art genius, Rehema Chachage, whose video piece, Ungo, forms the core of the video art exhibition. Ungo holds a mirror up to the history of slavery on the Swahili coast, and the impact it has had on the politics surrounding the female body. The video exhibition space will also feature works by Tabita Rezaire, Bonolo Kavula, Lebohang Kganye, Malibongwe Tylio.

The Children Shall Return will premiere at the Stellenbosch Triennale on Thursday 19 March at 6 pm. There is a limited amount of tickets available for the public to attend the premiere, if you wish to join please email cindy@stellenboschtriennale.com by Friday 6 March. The premier tickets will be allocated on a first-come, first-served basis.

Screenings for the films below will be held at Kayamandi, Jamestown and Pniel from 18  to 21 March 2020.

The video installations of the artists below are on view to the public at Voorgelegen, 116 Dorp Street, Stellenbosch.

South African artist Athi-Parta Ruga was also due to take part in the film festival, however, due to technical errors on our side at the outset of the Stellenbosch Triennale, for which we take full responsibility, Athi-Partra has decided to no longer participate. We extend our sincere apologies to Athi-Partra and his affiliated gallery for the events that unfolded on 12 February. Whilst saddened by his decision to no longer take part in the Triennale, we honour and respect his work greatly, as well as his decision.

Maps were disabled by the visitor on this site. Click to open the map in a new window.